Some of the dates in my life, or in my family or friends’ lives, are significant for different reasons.  Mama’s birthday on Independence Day, Aunt Martha’s on Cinco de Mayo, Uncle John Bryant’s on Leap Day, all seem to speak to their personality traits and characters.  My friend Paula has had numerous strange and sad events to occur on March 17 in different years.  Over the years some of my Delta Omicron students’ recitals have been on memorable dates as well, such as Friday the 13th, or Halloween.  This year one of those recitals happens tomorrow, and this student will always remember her Senior Recital date.  April Fool’s Day.

April Fool’s Day has significance for me as well, as it is the grant date stamped on my FCC permit.  Back in the Stone Age when I began my career in broadcasting and media, a person had to apply for a permit from the Federal Communications Commission in order to operate a transmitter at a radio or TV station.  Those permits had to be posted in a central location in the station.  The last place mine was posted, it was taped into a binder, and when I removed it, the tape ripped off part of the text on the back side outlining the rules and regulations, and what it was illegal for me as an operator to do on the air with our signal.

I’ve joked over the years that my April Fool’s FCC permit grant date foretold what my career would hold in store!  The fact is, I had no idea about the journey upon which I was about to embark.  I was flying blind.  I had not gone to school to prepare for a career in radio and television, so I graduated from the “earn-as-you-learn” school of radio on my first job.  And for years, because I hadn’t studied broadcasting in school, I felt like a fraud and secretly feared that the Media Police would eventually discover me and throw me out of the business!

It turns out that my career in broadcasting has yielded me some of my most lasting friendships, taught me valuable skills and spanned nearly 3 decades.  From my first radio job where I played actual vinyl records and my first TV master control position using an antiquated commercial tape sequencer called Digitrol (a nightmare machine with a 9-second pre-roll!), I have seen old technologies fade away and new ones emerge.  Radio and television also seem to attract creative types.  I’ve worked with more writers, poets, artists and musicians than I ever dreamed possible outside of the professional music and art world.

I always tell the young people I work with through Delta Omicron to “have a plan, but be open to surprise”.  Over the years I’ve learned that God takes us where He does, when He does, for a reason.  Had I not been open to surprise—to flying blind—I would have missed my whole career and all the blessings it has brought me.  I am still very actively involved with music and pray that I always will be, as long as God gives me opportunities to serve Him in that way.  But my profession has been elsewhere, at least to this point.  And God has given me chances to serve there as well.  So it’s all good.  I’m still in many ways flying blind…and still very much open to surprise. 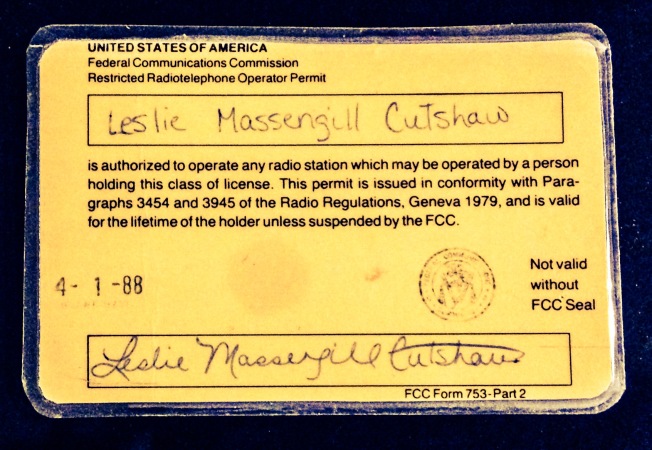 Proverbs 3:5-6 gives wonderful advice.  “Trust in the Lord with all thine heart, and lean not unto thine own understanding.  In all thy ways acknowledge Him, and He will direct thy paths.”  WhereEVER those paths lead.

I usually wear a ring on my right thumb, and the ring I wear there is usually one that belonged to Mama.  More specifically, there are a couple of her old rings that I take turns wearing on that thumb.  Unfortunately, I often fidget with my ring, rolling it up and down my thumb, and sometimes it slips off entirely.  Several months ago this happened at work, and the ring got lost.

I heard it drop to the floor and roll briefly…then I heard it drop a second time.  The environment I work in has elevated floors to allow for electrical cables to pass underneath, between layers of flooring which are several inches apart.  And in a number of spots there are small access holes for those cables to plug in to the machines we use in our daily work.

When I heard my Mama’s ring drop that second time, my stomach dropped with it.  I scrounged around on the floor on my hands and knees, with a flashlight, scouring every inch of floor in that little room, hoping to find my lost ring.  I even dug into the tiny access hole as far as my hand would reach (which wasn’t very far at all), shining my flashlight into that minuscule space.  No luck.

I gave up hope that it would ever surface again.  I even bought a “replacement” for it on eBay, an ersatz ring that resembled the lost one.  But I knew it was just a poor substitute for the original.  The thing is, it was not a valuable ring in terms of money, really.  Its real value was that it was Mama’s.

We’ve all had similar experiences, haven’t we?  We’ve somehow managed to lose something that we treasured, whether it had any real monetary value or not.  And even if we were able to find another item that looked like the lost one, it was never the same.

Fortunately, my story has a happy ending.  The area in which I lost that ring is currently under demolition/construction as part of a major rebuild happening in my department.  When I learned that the area was going to be demolished I spoke with my managers and told them I had lost a ring in that room, and asked them to alert the construction crew in case it turned up.  One day last week as I ate lunch, one of the construction fellows found me and asked if I was the lady who lost a ring in that room, and I responded that I was.  He held up a slim gold band and asked, “Is this it?”

And my heart soared!  What was lost had been found, and with tears in my eyes I said, “Yes, that’s it!  Thank you so much!  It’s not really worth much, but it was my Mama’s and I am so glad to have it back.”

It reminds me of the Bible stories where something, or someone, is lost for a time and then found and restored to its/his/her right place.  In each story there is great rejoicing when what was lost is found.  I’m grateful to have Mama’s ring back…and it seems fitting that it should be restored to me during Lent, a time when I contemplate Christ’s sacrifice on the cross, a love that restores me to God, no matter how lost I feel.

It’s the only direction God gave us…

My car wreck in January brought with it a number of inconveniences and issues.  The biggest of these was, of course, my car being totaled and the urgent need to find a replacement/successor for my DivaMobile.  Compounding the search was my insistence on purchasing another stick shift.  I am relieved to report that we found a worthy successor for Veronica.  Her name is Patsy Cline Clairmont Cutshaw; Cline for the obvious person, and Clairmont for Patsy Clairmont, a favorite author of mine.  The car is a 2011 Subaru Forester wagon/SUV with a 5-speed manual transmission, and with fewer than 40,000 miles.  So basically, she is just starting to get broken-in.  Lord willing and knock wood, we will have a long, happy and SAFE relationship.

In the car replacement process there were also several conversations with our insurance company.  I am grateful that everyone we dealt with did all they could to make a traumatic situation as stress-free as it could be, from ascertaining the total loss to simplifying the paperwork and getting the settlement check to us as quickly as possible.  Between those funds, our income tax refund and a little bit of savings, we were able to make a decent down payment on Patsy and begin the process of moving forward.

When I wrecked Veronica, lots of stuff got broken, including the watch I was wearing that morning.  It’s not an expensive timepiece by any means, but it has been a favorite of mine for probably 20 years, an easy go-to choice most days.  The actual mechanism of the watch was fine and it continued to run after the accident.  Just the crystal was broken and needed to be replaced.  Getting it fixed was not at the top of the list of priorities in the aftermath so I didn’t get it done right away.

Finally one day a couple of weeks ago, after several calls around town, I found a jeweler with a watchmaker who could fix it for me.  So I went by the jewelry store, got an estimate on the repair, and left it to be fixed.  It didn’t cost much, but it was still probably more than the monetary value of the watch.

I was able to pick up my little watch this past Monday.  What a simple joy to have something back that I had missed so much!  The last tangible thing damaged by the wreck is now made right.

It is not lost on me that replacing a car and fixing a damaged watch both speak of forward movement…the movement of traveling on the road, the forward movement of time.  Sometimes I think what I would be willing to give to make time move the other way…backward to before I wrecked my car, before the people I love started dying, before I learned that the world is not always a fair or beautiful place.  But that is not how it works.

Even when I put my car into reverse, it is for just long enough to get into a position which will allow me to move forward, on to the next place I need to be.  My watch only runs one way and that is forward.  Forward…it’s the only direction God gave us. 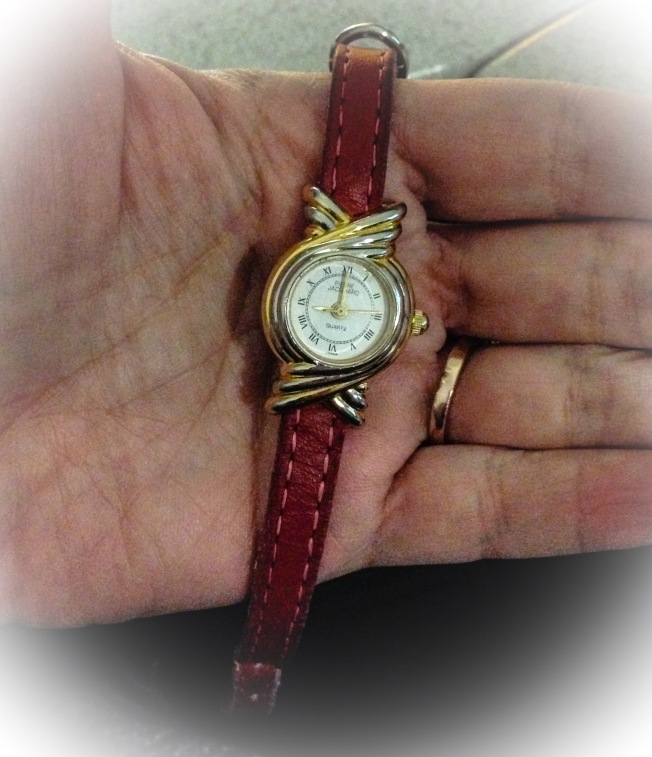