Mama and her sisters

Mama was the youngest of 9 children, 5 girls and 4 boys.  I was blessed to know most of Mama’s siblings and to have close relationships with them.  I missed out on knowing my Uncle Horace, who died before I was born, and my Uncle Eli, who died when I was very small and I have no memory of him, if I ever met him at all. The oldest child was 20 by the time Mama came along, so there was a big spread in their ages.  There was a big spread in their personalities, temperaments, talents and challenges as well.  None of Mama’s kinfolks were perfect, but they were all originals!

For years, Aunt Ruby would host Thanksgiving at her house.  It was the biggest family gathering of the year and an occasion I always looked forward to.  There would be so many of us that we would eat in shifts at the kitchen table.  Aunt Ruby would roast the turkey, starting in the wee hours of the morning.  I can’t count the number of Wednesday-night-before-Thanksgiving sleepovers I spent there with her and Uncle John and my cousins, waking up to the smell of turkey in the oven and the anticipation of seeing so much family throughout the day.  At some point during the day, 2 or more of the sisters would pile into the one small bathroom to pee and fix their lipstick and get tickled at something and laugh till someone had to pee again.  It was my favorite holiday, hands down.

For a number of years, Mama and her sisters would line up on Aunt Ruby’s front porch for a picture of  “The Big Five”.  They would line up in order of their ages, so whichever way the lineup went, Aunt Martha always ended up in the middle because she was the middle girl!  Mama enjoyed unique, close relationships with each of her sisters (and her brothers, too).  She, Aunt Ruby and Aunt Martha shared a love of quilting and spent many hours around the frames creating works of art that grace many of our beds to this day.  Mama and Aunt Elaine worked together for years in a nursing home caring for elderly patients, including Dad’s parents, my Mamaw and Papaw.  Aunt Mary was the oldest girl, but in many ways  she was the neediest because of the struggles she faced for most of her life.  Of all her sisters, Aunt Mary leaned on Mama the most.

Mama took a little something from each sister:  From Aunt Mary, her feistiness (and sometimes her temper!); from Aunt Ruby, her strength; from Aunt Martha, her humor; and from Aunt Elaine, her sometimes naive desire to believe the best about people.  I have been privileged to grow up knowing and loving these women.  Sometimes I am told that I bear a resemblance to one of them.  Often when I laugh really hard, it sounds a lot like Mama’s laugh, the music of the ages bubbling up from her and all the women in our family.  Only Aunt Ruby remains of “The Big Five”, the others having gone on to Heaven. 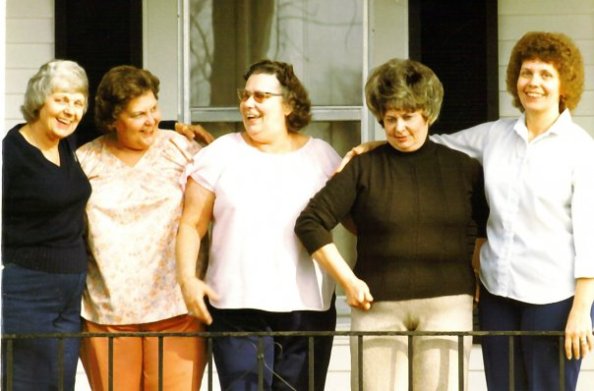