I’ve been at a loss about writing this post because I don’t want Patchwork And Potpourri to be sad, and right now there is a lot of sadness in my world.  Several friends have lost family members.  In other parts of my world, relationships are strained, stressed and broken.  People sometimes can’t get along, or maybe even stand the sight of one another.  Thanksgiving, Christmas and New Year’s don’t magically make these issues disappear…in fact, in some cases, the holidays just make these situations more painful.

Lots of holiday movies paint a picture of perfect people living perfect lives, snuggled next to roaring fires in snow-covered cottages with steaming mugs of cocoa.  There are blissful children around a Christmas tree laden with gifts.  It’s all very  Norman Rockwell.  My favorite holiday movie depicts quite a different scenario, one in which the protagonist thinks the world would be better off if he had never been born.

I had the chance recently to read Philip Van Doren Stern’s novella “The Greatest Gift”, the story upon which the classic Frank Capra movie,  “It’s A Wonderful Life” is based.  While the movie fills in a lot of elements not in the original story, the essence remains the same.  One person’s life makes a difference.  We all leave something behind.

In a series of concerts I sang in the weekend before Christmas, I spent some time looking more closely at my surroundings in the venue than I ever have before.  I wrote a bit about this and shared some musical instrument photos in my most recent post here.  Particularly fascinating to me were the many pieces of memorabilia backstage.

Items ranging from poignant to ridiculous adorn almost every corner, ledge and inch of wall space. 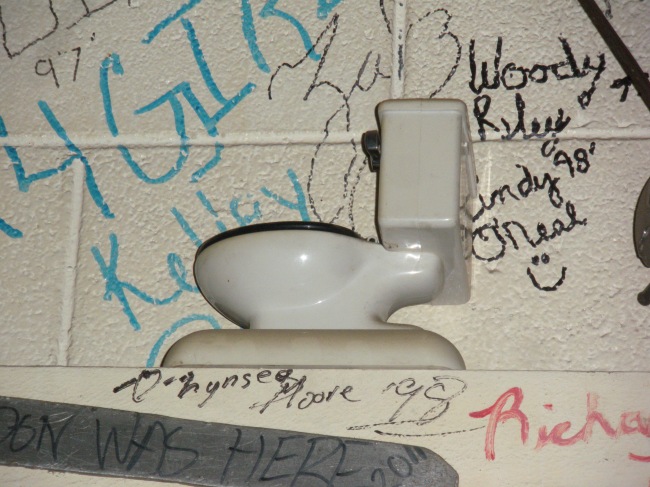 I don’t know why I’ve never paid any attention to all of the “stuff” backstage before, but this year I noticed it as though for the first time.  Among the various visual stimuli are decades worth of graffiti scrawled on the cinderblock walls.  I can’t help wondering about the people who have marked on the walls, left hats and boxing gloves and other items there.  And yes, I succumbed to the urge to leave my own mark behind.

Isn’t that what we all want, after all?  To leave our mark on the world, some evidence that we were here.  A single friend was talking recently about how the holidays make his uncoupled status seem sadder than at other times, and that he just wants to feel like he matters, that he is cared for.  I responded that the search for significance is universal, whether we are coupled or single, gay or straight, old or young or someplace in the middle.

As 2013 comes to a close, my prayer is that I have been building something meaningful to leave behind me, that my world is maybe a  little better for my having been here.  I have no human children, so my legacy will not take that form, but I will still have a legacy. We all do.

If someone remembers that I made them laugh, or held them when they cried…if I blessed someone with a song or offered encouragement when it was needed…if I lightened a load or kept someone company…then I’ve left something meaningful behind.  I hope to continue building a legacy of memories, laughter and music for the people I encounter along the way.