The year was 1993 and I had taken a short-term job at an AM/FM in Morristown, TN, about an hour up the road from where I live in Knoxville.  I did a live mid-day shift on the country AM, and then production and voice-tracks for the night shift on the FM.  The job lasted 3 months.  The friendship with Ron that began there lasted 22 years.

When I met Ron he had a rat-tail, which, for those unfamiliar with 90’s hair trends, was a long, thin strand of hair hanging down the neckline of an otherwise short haircut.  It could be considered a cousin of the mullet, I suppose.  I’d never had a friend with a rat-tail before, but Ron didn’t hold that against me.  In fact, he never held anything against me, ever.  Oh, he’d call me on the carpet if I wasn’t being honest with myself, but he never made me feel judged.  He was one of my “easy” people…easy to like, easy to talk to, easy to be with.

It was just about this time in 1993 that the young actor River Phoenix died outside a nightclub from a drug overdose.  When I returned to work the following Monday, as Ron and I were talking about the story we looked at each other and, at the same time, said, “Poor dumb b@$&@%d!”   I think this might have been the moment when I realized that, yes, we are going to be friends.

My last day of work at the station, he sent me 3 red roses, one for each month I had worked there.  I still have them, dried, in a wreath with other flowers from years gone by.  We promised to keep in touch.  And we did.  And in those days, keeping in touch meant actually writing letters, since there was no e-mail yet, (certainly no Facebook!) and phone calls between us were long-distance.  For years after I left the station he continued to call me by my middle name, Diane, which I had used on the air, even addressing letters to Diane. 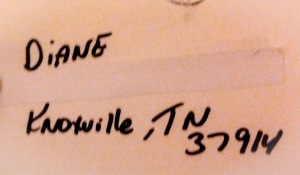 Later on, when he was working Friday overnights at the big Knoxville country station and I was working early Saturday mornings on the big adult contemporary station across town, he would visit me in my studio before heading home.  He knew the layout of our building about as well as I did, especially the location of the coffee pot and the men’s room.  And I visited him at his place several times on nights when I was free.  All this was before security cameras were everyplace and “unauthorized visitors” were so strictly forbidden.

I had the chance to visit with Ron in the hospital the night before he died.  He was in a lot of pain, but we still had a good visit together, talking about my husband and dog, and his children and both our workplaces, as well as the old days we shared in radio when we first got acquainted.  He was flat on his back and unable to move, so when his supper arrived, I said, “If you feel like you’d like to try to eat, I’m happy to help you with your supper so you don’t have to hurt yourself moving around.”  He said that would be good and I joked, “It ain’t nothing for me to cut up a man’s meat for him.  I won’t tell anybody, but you can tell people this cute brunette with big hair and big boobs hand-fed you your supper!”  And we laughed.  He ate decently considering the pain he was experiencing, and after he ate I asked, “Now that your belly has something in it, do you think you could sleep if I went on home?”  He said yes, so I got ready to leave.  But not before we had the chance to exchange “I-love-you’s”.  At that point there was no indication that less than 24 hours later he would be gone.

Now as I face the grief process for yet another treasured friend who died too soon, I feel many emotions.  I am sad, of course.  But I’m also grateful, for more than 2 decades of friendship and memories, for the clock he sent me as a housewarming present with a note saying he’d try to get by the studio that weekend for a visit, for the t-shirt from his station that he gave me and that I treasure (and can now fit into).  And I am especially grateful for our last “supper date” when I was able to offer him some nourishment for both his body and, I hope, his heart.

And once again I find myself walking into a daunting place, whispering, shouting, praying…

Lord help us on the broadcast.

I hate to be late. HATE it!  So, I always wear a watch.  Sometimes I wear more than one watch at a time, as both a fashion statement and a reminder to be where I need to be, when I need to be there.

If there is one lesson God keeps trying to teach me, it is that time is precious.  Life can change in an instant. Opportunities are presented—or lost—in the blink of an eye.

Throughout my life as well as in recent months, my world has been altered by deaths of people I love.  Not “loved”.  LOVE.  Present tense.  I cannot bring myself to say that I “lovED” a person who is no longer living.  Just because someone died doesn’t mean that the love stops.  I don’t even believe that the relationship between us stops; it changes by necessity, but I don’t believe that it ends.

It’s as though the person I love has changed addresses, relocating to a place where I am temporarily unable to see or touch him or her.  I have, however, been known to speak to my departed loved ones (not in a way that will result in my being hauled off to the asylum!) and they often visit me in dreams.  The relationships and the love go on.  We are just temporarily separated.

Still, I tend to take my relationships for granted.  I think most people do…until we get a stark reminder that nothing lasts forever.  For example, several years ago a friend and co-worker was killed in a wreck.  Gone in a split second.  Suicide, both attempted and and completed, has touched my life, more than once.  Fast passings from aggressive cancer, slow goodbyes from Alzheimer’s disease and COPD, sudden massive strokes and heart attacks have all taken loved ones from me and my family.

It doesn’t matter whether a person leads a charmed life of wealth and success, or a humble existence of  living paycheck-to-paycheck.  It is immaterial whether one is educated or not, privileged or not, a have-or-have-not.  Suffering and death are the greatest equalizers, and if we live long enough, we’re all going to get some of both.

Whatever needs doing in my life, I need to do it.  Do it now.  Speak the truth.  Write the letter.  Make the phone call or send the e-mail.  I need to hug and kiss, laugh and cry, and go about the living of my big, loud, messy life.

Because life is short

Sometimes walking along the path of life, I step in it. You know the “it” I mean…the metaphorical pile of poop that stinks up my shoes and makes a bit of a mess. The only way to avoid steppin’ in it is never to take a step at all.

Before Mama died, I was much more insecure about reaching out to people who might reject me. I was afraid of getting hurt and looking foolish. Mama’s death changed my perspective about many things, including risk. In the 18 months following her death, 5 of my co-workers experienced the death of a parent. In each case I had a choice, either to risk reaching out in compassion or to stay inside myself and my own grief. And in each case I opted to reach out…to take the risk of opening myself to another hurting person. And I never regretted it.

Right now I have several friends who are dealing with illness and grief in their lives, and since their lives touch mine, I am touched by their suffering. My heart hurts for all of our feelings of helplessness and lack of control over circumstances. Self-preservation nudges me to isolate myself from their suffering in an effort to minimize my own.

But my heart of hearts urges me to step into their pain, to lean into human frailty and to try to shore up those around me who suffer. As I walk alongside, my shoes may become soiled with their blood, sweat and tears, and my arms may ache from trying to help carry their load. But it’s the only way I know to live.

My life is constantly teaching me lessons about how fragile we humans are, how fast time passes and how important it is not to leave things undone. I do not want to die regretting the thing I DIDN’T do or say. Sometimes saying what needs to be said or doing what needs to be done means steppin’ in it…and if that’s the case, then so be it.

Jesus knows the path we walk, including through the valley of the shadow of death. He knows what we step in. He washed the disciples’ feet, after all. I like to imagine a welcome mat at the pearly gates where we can shake off all that we’ve stepped in here as we prepare to enter Heaven. 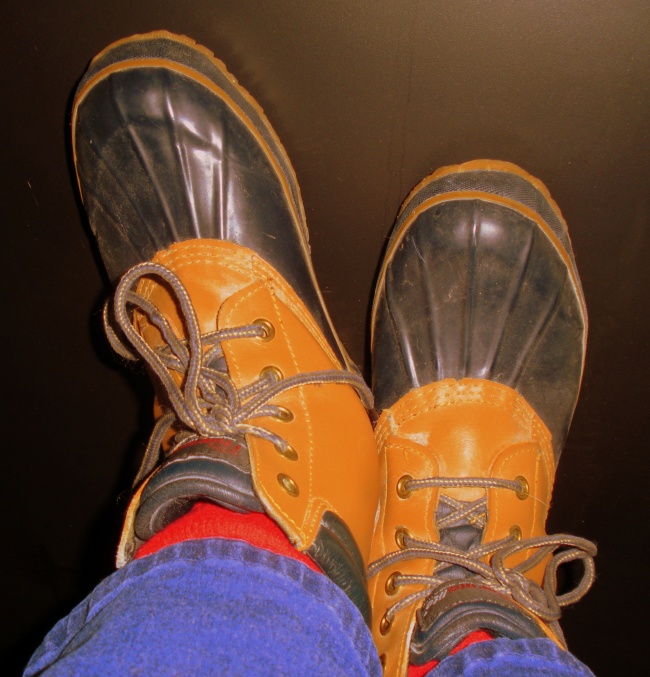