I have always been a sucker for a pretty calendar.  Decades ago when I first discovered Coach leather goods, I purchased a navy leather organizer that contained an address book.  The address book is still inside it, along with all the addresses I have penciled in (including those of people who have died. I’ve never been able to bring myself to erase them.  It’s just too sad.)  There is space on the other side to tuck in a small pad of paper or a calendar.  My preference is for a calendar, one with monthly and weekly spreads, and with enough space to write down things like birthdays, appointments, musical events, etc.  I color code the items so I can quickly identify what is going on and coming up.

My calendar serves as a hybrid volume: a planner for what’s coming, a journal for what has come and gone, and a mini-scrapbook for my memories about both.  A couple of months ago I posted a query on social media asking my friends who are “planner people” which planners they use and like, and what features they appreciate.  My current work assignment as a temp got me thinking that I needed to branch out a bit and try a vertical daily calendar layout, and I wanted some feedback on what my friends were using to schedule their lives for efficiency and productivity.

I received numerous replies suggesting all kinds of planners at various price points, and with lots of interesting and helpful features.  The one I ended up choosing for myself has a lot going for it, but the main selling point for me was its disc-bound format that allows me to add and remove sections as I need/want/use them.  Ultimate customization is ultimately appealing!  It offers plenty of space to write, add stickers and washi tape, and the paper is good quality with no bleed-through. 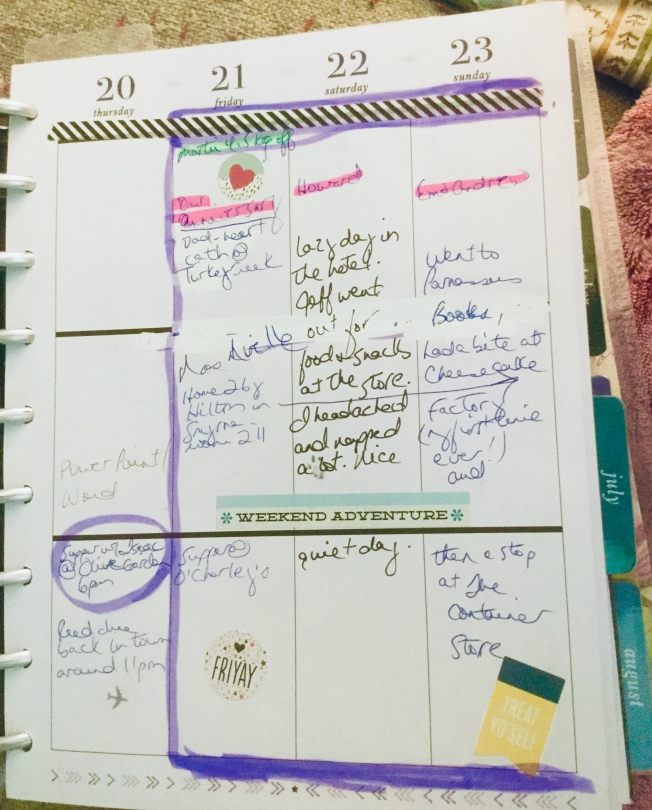 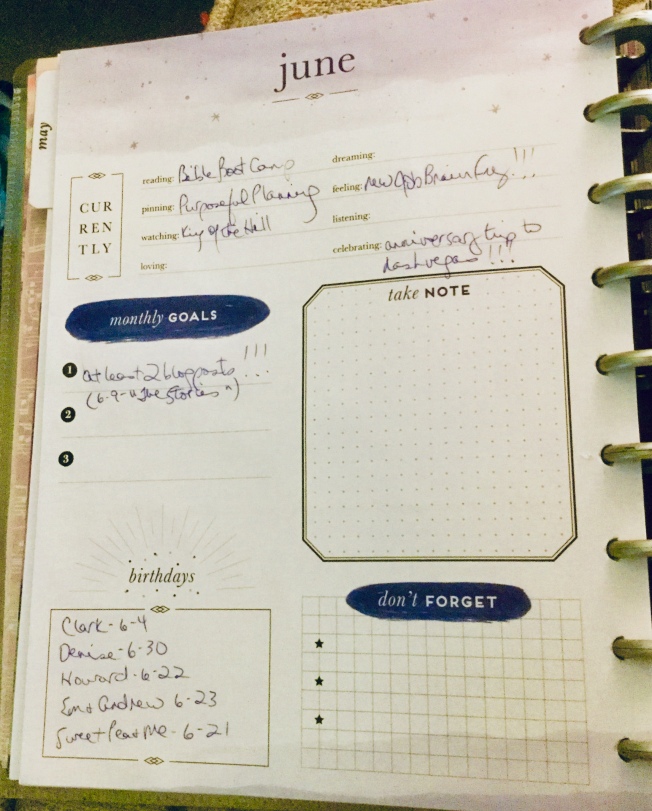 As much as anything else, my hope is to plan and document my life’s passages, and the life passages of people I love, in a creative, meaningful way.  I have kept my calendars for years, looking back over them with gratitude for a written record of events as they have happened.  An electronic calendar works great for some people, and at some point it might work for me; but I don’t think I will ever be able to part with the old-fashioned-pen-to-paper tool that I’ve used all my life.  The simple act of writing things down feels good to me; it reminds me of both the things to come and the ones already done; it gives me some accountability to see my goals in writing; and ultimately I hope it will help me to become more productive and effective as I try to live a meaningful life of service to God and the people around me, navigating my life’s passages with joy, wisdom and purpose.

How music binds us to one another…

Recently I had the pleasure of attending the 2015 Triennial Conference of Delta Omicron International Music Fraternity. The fellowship of musicians from all over the country is one of the best parts of attending Conference, as well as getting to know students from my own chapter better. I have mentioned that I serve as the Chapter Mother for the Alpha Gamma Chapter of Delta Omicron at Carson-Newman University. But I have never shared how my association with Delta Omicron began or how I came to my current place of service.

I was initiated into Alpha Gamma Chapter as a second-semester freshman at Carson-Newman, the earliest chance I was eligible to join. The ideals of Delta Omicron appealed to me, and many upperclassmen I respected were members. Plus they seemed like they really enjoyed themselves and each other. I just knew that Delta Omicron was something I wanted to be a part of.

My student days as a member of Alpha Gamma Chapter provided me with many opportunities for growth as a musician, a leader and a servant, including some experiences I never imagined. My first Conference experience was as a student when, in 1984 as a rising junior, I attended the 75th Anniversary Triennial Conference. It was held at Kent State University in Ohio. A few weeks prior to the event I received a letter from the Board of Directors inviting me to be the speaker for the Collegiate Dinner, sharing my visions for Delta Omicron’s future. I’d never given a speech before and I had no idea why they had picked me to do it! But it was then that I learned that public speaking is fun and I actually enjoyed it. It was an honor to sit at the head table with “the grown-ups”! 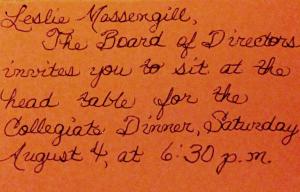 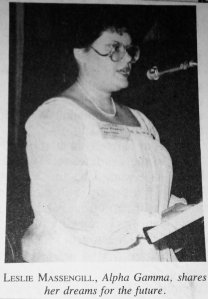 Our chapter had established a long and distinguished heritage of excellence even when I was a student. Established in 1966, Alpha Gamma has been guided throughout its existence by Chapter Advisor Ann Jones, a consummate musician and educator, a humble servant and a treasured friend. She was a huge influence on my college career and a large part of why I wanted to join Delta Omicron. I think many members of Alpha Gamma Chapter through the decades feel the same way.

My senior year, 1986, was Alpha Gamma’s 20th anniversary.  Alpha Gamma was blessed at that time to have Mrs. Daisy Heard as our Chapter Mother. This dear lady knew all sorts of interesting people and famous musicians, and she had accumulated tons of memorabilia from operas, concerts and events she had attended over the decades. I always describe her as an expansive presence and a force of nature, the kind of lady I’d like to be when I grow up. Our chapter has always been filled with people like that, the kind I want to emulate. The kind I want to have as friends. 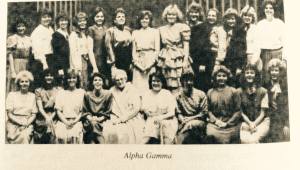 (Alpha Gamma’s 20th anniversary photo.  I am front row center seated next to Mrs. Daisy.  This picture is a treasure!)

Flash forward to 2006. I had been to my 20 year reunion at Homecoming and had finally started to feel like an adult (more or less!) and I was looking for a way to give something back to the school and the music department. So I met with Ms. Jones and asked if Alpha Gamma had a Chapter Mother, and at that point, they did not. She got the ball rolling and I was installed in December 2006. My next Conference (and first as a Chapter Mother) was the Hundredth Anniversary Conference in 2009, with Ms. Jones and our chapter delegate, Allison (now the Zeta South Province President and giving back as well). 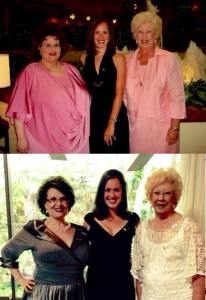 (Me with Allison Hill Hendrix and Ms. Ann Jones, friends and sisters in Delta Omicron, from 2009 and 2015 Conferences)

The Fraternity that meant so much to me as a student welcomed me back to encourage new generations of student musicians! When I meet new students who are considering membership, I always share what my student days in Delta Omicron meant to me, so much so that I wanted to come back and serve as Chapter Mother. I have watched students come and go, perform recitals, graduate and carry music into the rest of their lives. Some have married and had children; some have earned master’s degrees and beyond; many are church musicians and school music teachers. And I am proud of them all.

With the advances in technology and social media, we are now able to connect with members of chapters far and wide, sharing ideas, experiences and stories. It is a joy for me to be able to see what Fraternity students and alumni are doing in their lives, musically and otherwise. And it is a blessing to share face-to-face fellowship with “my kids” of Alpha Gamma as often as I can be with them.

The gifts of music and friendship tie us to one another here and now. They also bind us to generations of other Delta Omicron members from the past and those yet to come. It is a blessed heritage indeed, one of warm memories and exciting possibilities.

The Prayer of Delta Omicron that we sing at meetings, ceremonies and senior recitals is as follows:

May all our ties and friendships be

strengthened and honored, Lord, by Thee. 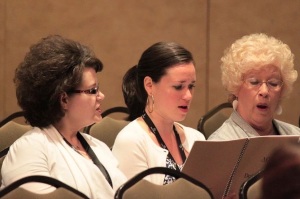 (Me, Allison and Ms. Jones, courtesy of Delta Omicron Triennial Conference 2015.  I am so grateful that this moment was captured. A true illustration of how music ties generations of friends together.)